I wanted ActivityLog2 to show that my New Zealand skiing run started at 10am, rather than showing 6am, which is the local time in Western Australia, where I live. This feature took a long time to implement, plus it required a surprising amount of effort, and this blog post describes some of the implementation details.

The user visible changes are very modest and almost unnoticeable: all the timestamps display the time where an activity took place, rather than the local time where the activity is viewed. In the screen-shot below, the start time for the skiing run is shown as 9:48am, even though it would have been 5:48am in Western Australia where I live. The only “hint” is a time zone abbreviation in the session inspector: 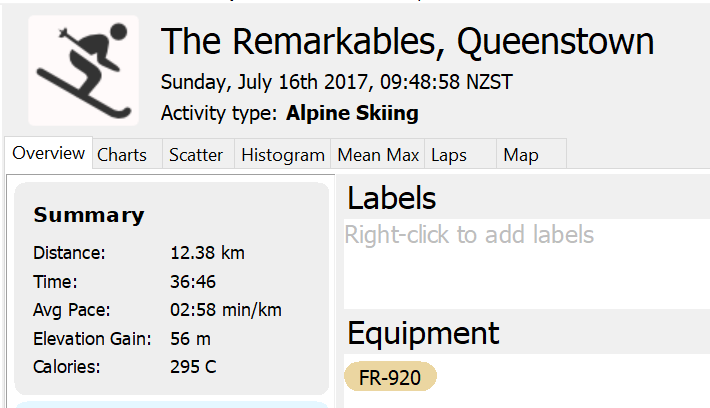 Local Time Displayed for a Session in ActivityLog2

All the other places where timestamps are shown, such as the activity list or the lap viewer will display the time relative to the destination location and in addition to that, the user can edit the time zone for an activity, although for activities with GPS data this is automatically detected on import.

Implementing this “simple” feature took about two years of calendar time and many weekends of actual work, doubled the size of the application installer and increased the complexity of the build process. Looking at the 1300 lines of changes, one could wonder if the feature was worth it. On the other hand, I did learn a few things during this process and I no longer have to wonder why my activities recorded in Europe or New Zealand show up at such strange times of day.

ActivityLog2 stores times for activities as UTC seconds, which is are integers representing the number of seconds since January 1st 1970. The Racket libraries can convert this into a date structure using seconds->date. This conversion can be done in two ways: either show the UTC time or the local time on the computer where the code runs:

In the example above, the same number, 1571464832, can be converted to show either 6am in UTC or 2pm in Western Australia where I run the code. There is no built-in way to use the local time in another place, such as Auckland. We can however use the tzinfo package to determine the timezone offset for another time zone, such as “Pacific/Auckland”, apply the offset to the time stamp than convert it to a date structure. All this would show us that it is 7pm in Auckland as I write this:

It is perhaps worth clarifying that a time zone name such as “Pacific/Auckland” refers to a set of rules for determining the local time, and we need to call utc-seconds->tzoffset for every time stamp, as the offset itself might be different during daylight saving.

The date structure as obtained above can than be passed to various date and time formating functions, which produce the strings to be displayed to the user.

All that is required to display the local time is to store a time zone name for each session and use it when formatting times. The simplest solution is to prompt the user to update the time zone manually for every activity they import, and the tzinfo package does provide an all-tzids function to list all time zone names and construct a GUI drop down control, but it is impolite for the application to ask the user for information that it can determine by itself. Besides, I have 2524 activities in the data base, and 1349 of them have GPS information — I am the main user of ActivityLog2 and I was not going to manually update all of them.

The solution is to have a function which can determine the time zone name from GPS location data, since most of the activities already have location data. There are several packages that do this, here is one for Python and one for JavaScript. Unfortunately, pkgs.racket-lang.org didn’t have one for Racket.

I could have just copied the implementation of one of these libraries, the tz-lookup one in particular is relatively simple, but instead I decided to try to understand the underlying mechanism for determining a time zone from latitude and longitude so I came up with my own implementation. After several failed starts, which I kept to myself, I produced the tzgeolookup package along with a few blog posts describing how it works, here, here and here. The end result is that I now have a function which can determine the time zone from a GPS coordinate and this can be used to determine the time zone when an activity is imported.

The tzinfo and tzgeolookup packages provide the building blocks for formatting timestamps in local time, the next issue to address was storing the time zone information in the database. The time zone could be determined at runtime using lookup-timezone, but this can only be done for activities which have GPS information; for other activities, such as Lap Swimming, this information has to me manually entered by the user and stored in the database.

The ActivityLog2 application uses a somewhat unusual database upgrade mechanism, where an initial database is always created from a full database schema file, while previous versions are updated using migration scripts. This creates some potential for mistakes, since a new database schema might not be identical to an upgraded one, but there are extensive tests, run during CI builds, which ensure that (1) new databases can be created without error, (2) existing databases can be upgraded without error, and (3) activities can be imported into the database.

One limitation for this upgrade mechanism is that it is only able to run SQL scripts, so anything that cannot be expressed in SQL, cannot be part of a database upgrade. For the first time for an upgrade, and this is number 32, I wanted to update the time zone for activities already in the database, but this is not possible using just SQL statements.

Rather than spending even more time on implementing a Racket migration mechanism, I opted for the simpler route of providing an “Update time zones…” tool, available in the Tools menu, which runs the update code on all activities in the database. The code is small and simple: an SQL query retrieves the list of sessions which have GPS information, along with the coordinates of their start location:

A small racket program iterates over the result set from this query, determines the time zone using lookup-timezone and updates the A_SESSION table: 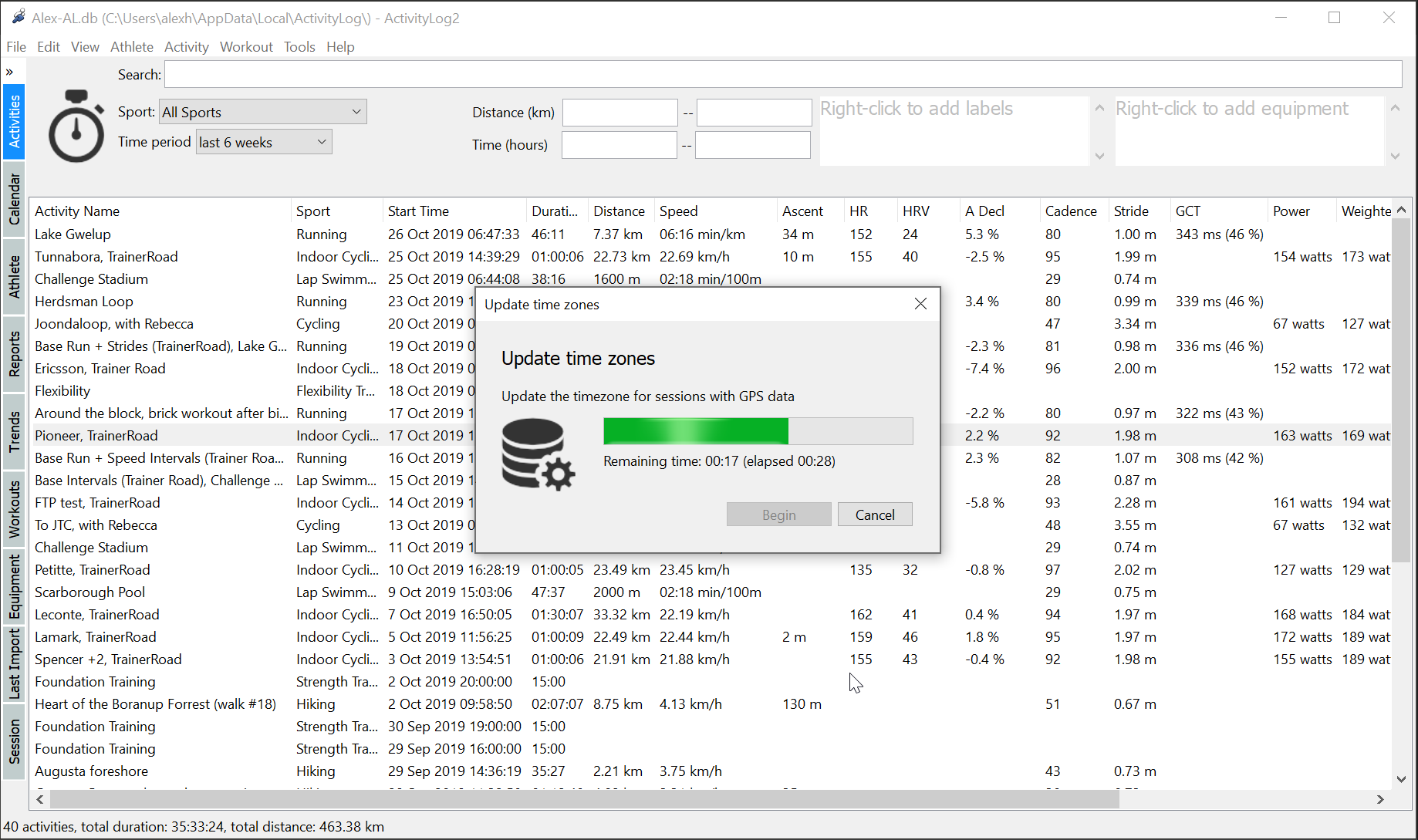 Allowing the User to Edit the Time Zone

Automatic time zone detection is convenient, but it is not always possible, as not all activities have GPS information. The two major types of such activities (that I have anyway) are Lap Swimming sessions and bike sessions done on an internal trainer. This means that the application must allow the user to edit the time zone for an activity. There are two places where this can be done: the first one is the session inspector headline which allows switching to “Edit” mode, to allow the user to quickly adjust the title, sport and now time zone:

Edit Timezone in the Session Headline

The second place is the dialog where the full activity details can be edited. As a side note, the activity editor was one of the first things I wrote for ActivityLog2, doing it while still learning Racket, and the code base was “less than ideal”, I would probably approach the task differently if I had to do it again, but my opportunities to do things a second time are limited… 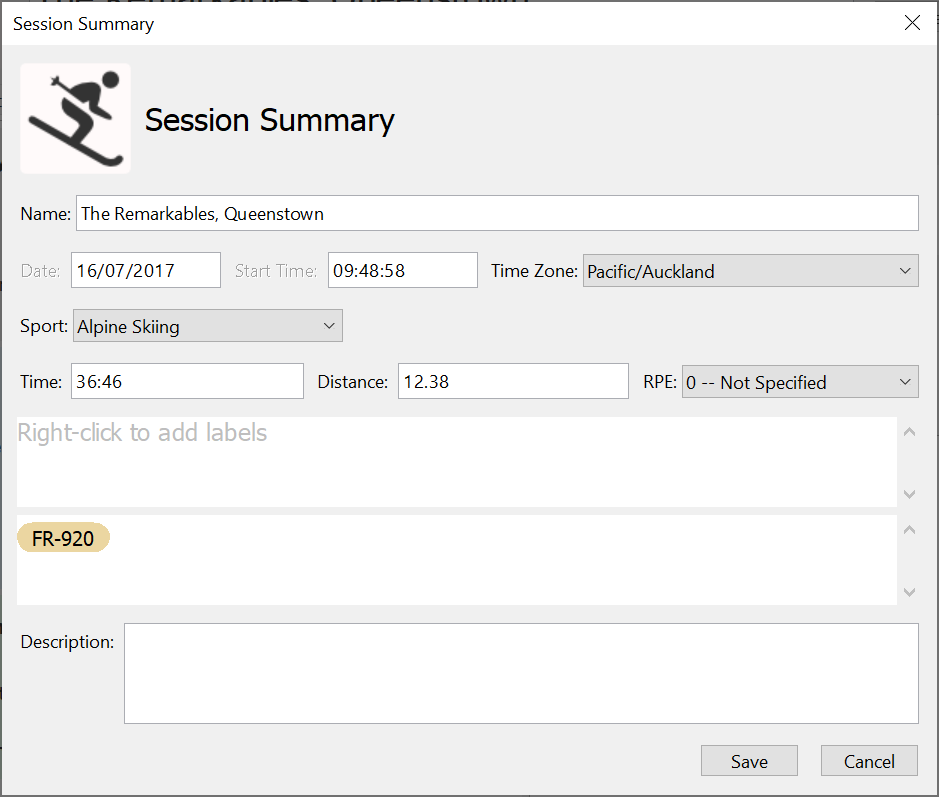 Edit Timezone in the Session Editor

Perhaps it would be a surprise to many, but ActivityLog2 used only packages that are part of the main Racket distribution, with no external packages needed. I always liked the fact that one could just install Racket, clone the ActivityLog2 repository and run the application’s run.rkt file.

This has changed now: the tzinfo and tzgeolookup packages, plus their dependencies, must be installed for the application to build and run. These dependencies have created a few problems related to package management. For a simple use case, one can install the dependent packages from the default Racket package catalog using a single raco command:

Alternatively, the dependencies can be added to an info.rkt file and converting ActivityLog2 into a pseudo-packages, so the dependencies are installed when the user runs rack pkg install in the application directory.

However, the problem with this approach is that these package dependencies are not versioned: raco pkg install will always install the latest package available in the catalog server, and this is not what is intended if an older version of the application is checked out. Also, and more importantly for my use case, some of the packages might contain bugs which are not yet fixed. An example is the tzinfo package which has a bug preventing its installation on Windows. While I submitted a pull request for this issue, I wanted to be able to use the fixed version until this issue is fixed and an update is available on the official package server.

The solution was to add all dependent packages as git submodules to the source repository of the application, and let git manage the versions of these packages. During the build, a new package catalog is created using the pkg/dirs-catalog command, and this is added to the list of package catalogs:

The actual script run by the build is a bit more complex, but once the catalog is set up, the packages can be installed using:

Why not just link the packages in place? After all, the build script could have just ran a raco pkg install in each package folder. The “catalog” mechanism solves additional problems:

This mechanism offers flexibility but also has some limitations, as the package installation is global, meaning that any program which wants to use the tzinfo or tzgeolookup packages will use the ones installed from the ActivityLog2 “pkgs” folder. It would be great if the packages could be installed for a specific application only, but I could not find a way to do that.

This was a large task to implement: it took me two years since I recorded this as an issue, the commit is over 1500 lines of code, the resulting binary application size increased by about 25Mb, and I quite possibly introduced some bugs along the way. As I look back, I question if it was worth it. Well, as far as usefulness goes, the answer is probably no, since I only have a few activities which were recorded out of my regular time zone, I could have lived without this feature. On the other hand, I did learn a wide variety of things, from working with git submodules, setting up custom package catalogs, and implementing efficient lookup algorithms for geographic location lookup, and I think this aspect made the task worth it.