The timezone-boundary-builder project publishes GeoJSON files with timezone boundaries based on OpenStreetMap data, and I though it would be an interesting project to load this data in Racket, build some map visualizations with it and explore some of the Racket drawing facilities. 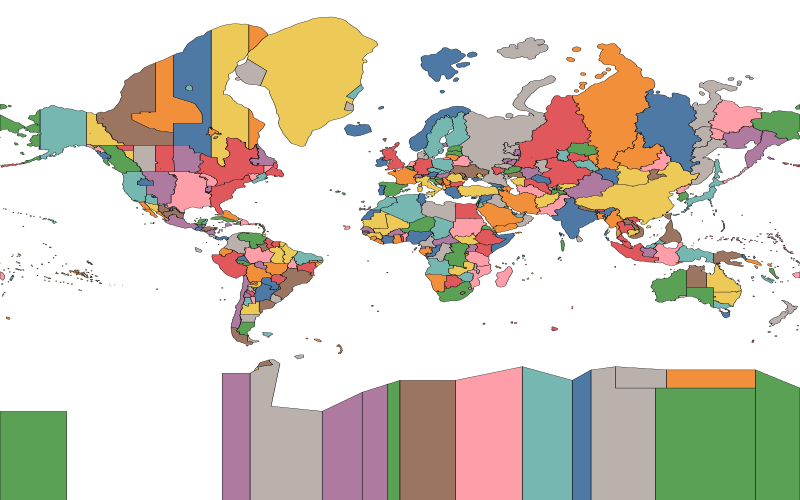 The GeoJSON files can be downloaded from the releases section section of the timezone-boundary-builder project. There are two sets of files: one contains timezone data for the oceans and one only contains timezone data for the countries. In the examples below, I used the country data only, as this produces nicer maps. Besides, on the oceans, the timezones match the longitude boundaries of the globe.

The GeoJSON timezone data can be loaded into Racket using read-json, and it takes about 25 seconds to load the 127Mb JSON file when using Racket 7.3 — this actually is a huge improvement over the previous Racket version which needed about 130 seconds to load the same file.

The JSON object is represented in Racket as a hash table for the key/value mappings and as a list for the arrays and this means that the object could be printed directly in the Racket REPL. However, this is a large object containing a lot of data so printing it will take a lot of time and, with a lot of data points printed, it will be difficult to see its structure. It is helpful to write a function to simplify the JSON object, discarding most of the data, so only a subset is shown — this will not be useful for processing the actual data, but it will help with having a smaller data structure on which to test the processing functions defined later. The function random-sample defined below does this: it creates a copy of its input object, but only keeps max-size items from the sublists inside the object:

The json-write function can be used to write out the result in JSON format, and this can be used to generate smaller subsets of the data, after all, it takes about half a minute to load the actual data, which can be too much when the program is evaluated repeatedly during development.

With the simplified version, it is easy to follow the structure of the JSON file. The Wikipedia GeoJSON article explains the overall structure of a GeoJSON document, but here is a summary:

Since Racket represents a JSON object using hash tables and lists, it is easy to write functions which manipulate the data. For example, to find out how many timezones there are, we can count the number of features in the object:

Drawing the timezone boundaries as a map

The best way to look at GeoJSON data is to draw it on a map, so in the next section we’ll explore how to draw these timezones using Racket and will produce the picture shown at the top of the blog post. However, this task requires some more advanced use of Racket’s drawing capabilities and before we can look at it, it is worth refreshing some of the more important concepts.

In the example above, the bitmap-dc% is a concrete device context implementing the dc<%> interface and drawing onto a bitmap and once created it is sent three commands: set-pen, set-brush and draw-rectangle. The drawing commands, such as draw-rectangle will use the currently set pen for the outline of the drawing and the currently set brush for the “fill”. Pen and Brush objects use up drawing resources and to avoid unnecessary creation of identical pen and brushes, the-pen-list and the-brush-list databases can be used: they will create a new resource if needed, but otherwise just return a previously created one. Finally, a bitmap object can be saved into a file using save-file. The result is not very exciting yet: 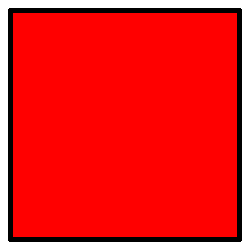 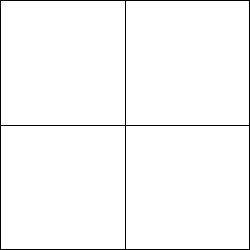 The device context interface provides primitives for drawing basic shapes, such as lines, rectangles and ellipses, but for more complex shapes, a dc-path% can be used, this is an object holding a set of lines and curves. A dc-path% can be open or closed, and a closed dc path will have its interior filled with the current brush color. Below is an example of drawing a pentagon using a dc-path%, since we use device scaling, the points for the shape can be defined on the unit circle: 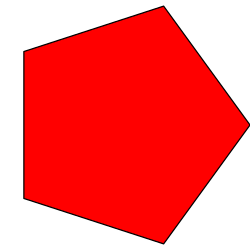 The overall process for drawing the timezones is straightforward: for each time zone (which is a feature in the GeoJSON file), construct a dc-path% with all the points that are part of its definition, than render the path using a distinct color. There are, however, a few details to discuss.

The toplevel function for drawing the bitmap takes as parameters the timezone GeoJSON data and the width and height of the desired bitmap. It sets up a bitmap device context, and sets its scale such that the entire drawing area is from 0 to 1, it than iterates over the features in the GeoJSON file (each feature is a timezone shape definition), it assigns a brush color for filling in the area, than calls draw-feature to draw the actual timezone shape.

Ideally, we would like to render each time zone in a distinct color, but for now, the code just cycles through a palette of colors, which means that some timezones will share the same color. For completeness, here is the color table, which is a list of color% objects:

The draw-polygon function receives a polygon, which is a list of GPS coordinates, constructs a closed dc-path% from them and draws it onto the device context. A GeoJSON polygon is actually defined as a list of lists, the first list being the “outside” polygon, and the remaining one are the “holes” inside the main shape. The code below uses sub-paths of the main dc-path% to create these holes.

Finally, the lat-lon->map-point function takes a pair of GPS coordinates (latitude, longitude) and converts them into normalized coordinates which are values between 0 and 1, where 0 and 1 are the edges of the map. The projection we use here is Mercator, which is what is used by most maps, but any projection would be adequate for the task. Note that the device context scale shows its usefulness here: since the device is scaled, the normalized coordinates can be drawn directly onto the device context, without having to worry about adjusting them. Also, changing the rest of the code does not need to worry about changing the size of the bitmap.

You can find the entire program as a github gist (the "example4.rkt file), and the output is shown below. The entire program is less than 100 lines long and only uses standard Racket libraries and no external packages.

The final result is shown below, but the map requires some explanations. First, the Mercator projection used for the map does not work very well at high latitudes and breaks down at extreme ones, so Antarctica looks unfamiliar, this is not helped by the fact that parts of Antarctica are not covered by any timezones. Second, the white area of the map represents oceans, where no specific timezones are defined — in these area, the timezone can be directly determined from the longitude — the timezone-boundary-builder project also provides GeoJSON files with timezones for the ocean areas. Finally, these are timezone boundaries, not country boundaries, and, while some countries can be recognizable, other are not.

The code above cycled through a color map containing only 10 unique colors. While it produced a pleasing result, many timezones share the same colors, including sometimes neighboring colors. While 4 colors are sufficient to color any map, such that no adjacent regions have the same color, it is much simpler to just assign a unique color to each time zone.

The idea behind this is to allocate a unique ID to each time zone, than allocate colors for each of these IDs. The tzdata structure keeps information about a time zone, its ID and color. The allocate-tzdata will create a list of tzdata structures, assign an unique ID by incrementing a counter and creating a color% object for it:

There are multiple ways to generate colors from integer identifiers, but the simplest method is to treat each digit in the number as one of the R, G, B channels, since there are 426 time zones, this seems sufficient. In addition to that, to separate the colors a bit more, each digit in the channel will be multiplied by 28, so each color channel is used evenly. I.e, rather than using 0, 1, … 9 for the red channel, we’ll use 0 * 28, 1 * 28, … 9 * 28 for these values, and since 9 * 28 is 252, all values will be below the maximum 255 value:

By the way, the tz-name is just a helper function which retrieves the tzid property of a timezone GeoJSON feature:

Finally, the make-timezone-bitmap toplevel function will need to be updated to allocate colors for the timezones and use them for rendering:

The result is shown below. The code does not make use of all colors, since it only uses about half of the colors that could be allocated using our strategy: 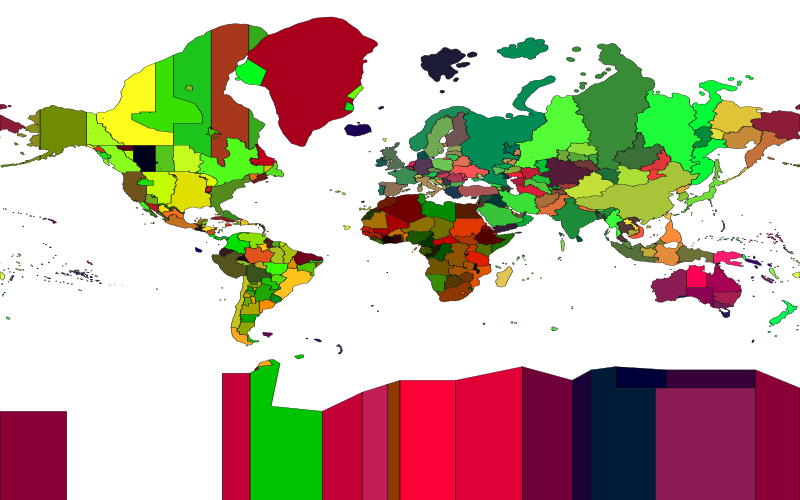 Rendering a subset of the map

The set-origin and set-scale methods of a device context can be used to render a subset of the map, without having to change the rest of the rendering code. To render the map between two GPS coordinates, min-coord and max-coord, we’ll first have to convert them into normalized coordinates (between 0 and 1) using lat-lon->map-point, than calculate scaling values such that the X and Y coordinates between the two points correspond to the actual width and height of the bitmap. The origin will have to be translated such that the point at min-coord is at (0,0) — this has to be a negative adjustment. The setup-dc function below does all this, preparing a device context to render a subset of the map between two GPS locations:

The main rendering function, make-timezone-bitmap remains largely the same, except it now calls setup-dc to prepare the bitmap and the rest of the drawing functions remain completely unchanged, as the drawing code will keep track of the current target bitmap size an clipping regions:

To test this code, I visited openstreetmap.org and obtained two GPS coordinates for the rough bounding box of Europe. To render the European timezones I used the following call: 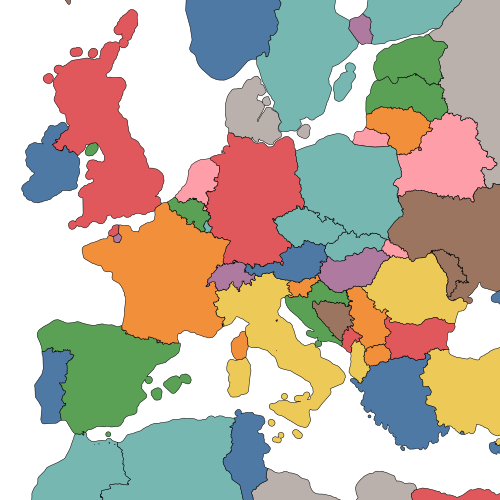 The Racket program used to generate these maps has less than 100 lines of code and only uses features from a standard Racket installation, I suppose this is an example of what “batteries included” means.

I was also pleasantly surprised that the Racket drawing library can handle large drawing requests: some of the dc-path% objects have in excess of 100′000 lines and most of them have more than 50′000, with most of the lines being less than the pixel size of the resulting bitmap. Without any optimizations, the code above loads a huge JSON file and renders a map with a total of 5 million lines in just over a minute on my machine — when I started working on this code, I expected I will need to run some line simplification algorithms for the timezone boundaries, but this proved unnecessary. There are several optimizations that could be done to make the rendering faster, but since timezone boundaries change less often than the 1 – 2 minute rendering time, it is simpler to just keep the generated image around.

I uploaded all the programs used to generate the maps in this blog post to this GitHub Gist, you can run them directly and further experiment with them.