With the future of Travis uncertain, I started looking for a Continuous Integration alternative and since Microsoft advertised Azure DevOps everywhere I went on the web, I decided to give it a try. I now moved all my Racket packages to Azure Pipelines, plus have a Racket application built with it, so I decided to write up some notes about my experience.

This blog post covers setting up an Azure Pipelines CI for a Racket package, but it does make any attempt to make the case that it is better or worse than the alternatives: I was looking for a Travis alternative, tried out Azure Pipelines, found it sufficient for my needs and stayed with it — at least for now. 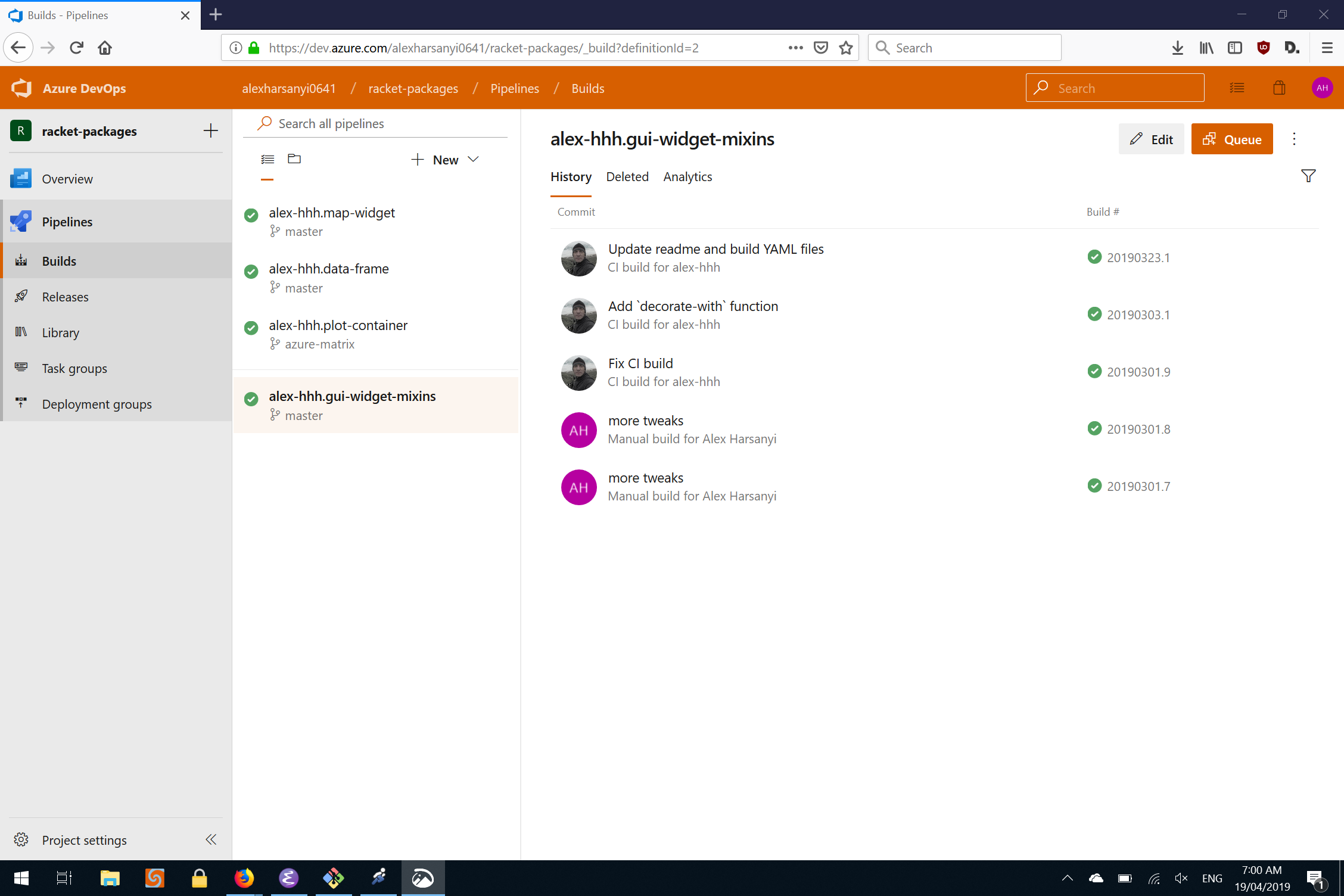 Azure Pipelines does not support building Racket packages out of the box, but as was the case with travis-racket for Travis, it turns out it is not too complex to setup build and test of a Racket package.

Before creating the actual pipelines, I find it simpler to setup the Racket package project with the required files, and there are two of them: the azure-pipelines.yml file controls the build, and install-racket.sh which downloads and installs Racket. These files don’t need to be in the root folder of the package, they can be anywhere (and the build YAML file can have any name). I prefer to place then (and any additional build files) in the ci sub-folder of the package. For an example setup, see the plot-container.

The azure-pipelines.yml file controls the build and test of the application, and for a basic racket package can be really simple. The example below should work for any package as long as the PACKAGE_NAME variable is updated to contain the actual package name:

If you are familiar with Travis, the structure of the file should be easy to understand:

Unlike Travis, Azure Pipelines will not check out the sources in a directory the same as the package name, so the actual name of the package needs to be explicitly specified to the raco pkg and raco setup so these commands work correctly.

To build the package using different Racket versions, you can set up matrix configurations for variables by adding a strategy section to the azure pipelines files and specifying which variable combinations to use for building. In the example below, the package would be built with two jobs, one for Racket 7.2 and one for Racket 7.1:

If the Racket package uses the racket/gui library during running the tests (even if no GUI windows are opened), you will find that the above pipelines file will fail to build, because no X Server is running by default on the build machines. The solution is to start the X Virtual Frame Buffer server, Xvfb, as a separate build step early in the pipeline, than add a DISPLAY variable indicating which connection the server is using:

Racket is not installed on any of the virtual machines used for the builds, so it has to be installed as part of the pipeline. It is the simplest to do this in a shell script which is invoked from the pipeline itself. A basic shell script is just a few lines of code, which downloads the installer file using curl than runs it:

The above script will install the latest Racket version (7.2 at the time of this writing), but it also allows controlling the actual version using the RACKET_VERSION environment variable and the place where Racket is installed using the RACKET_DIR environment variable. Values for these variables can be specified in the Azure Pipelines build files, allowing installation of different versions without modifying this script.

The above script will work for recent Racket versions (7.0 onwards). For more complex installation shell scripts, which also handle older Racket versions, see the install-racket.sh script that is part of the travis-racket repository, and I also wrote my own version, mostly as an exercise in writing terse shell scripts. Both these shell scripts can be used in Azure Pipelines but they are somewhat complex to fit in a blog post, since they handle installation of old versions plus some extra checking.

Also, at the time of writing this post, the main Racket mirror site was down, so the download script uses the UTAH site directly. Normally, the BASE download URL should be set to https://mirror.racket-lang.org/installers.

You’ll need an Azure DevOps account and create a project to hold the build pipelines. A single project can hold pipelines for several GitHub projects — this is really convenient if you only want to use DevOps for the pipeline functionality, because you only need to create one project.

There are several on-line tutorials on how to setup and create the actual build pipeline, so this is just a short bullet point list of what needs to be done:

There are several other Azure Pipelines features which are useful in building more complex applications — for such an example, see the build pipeline for the ActivityLog2 project. This is a pipeline which can build a Racket application on both Windows and Linux (and there is an install-racket.ps1 which downloads installs Racket on Windows), download test databases from an external server, build an application with embedded API keys, which are stored as secret variables and publish the resulting installer as a build artifact. For more details about this process, see that builds README.md file.