… having spent most of the first blog post on writing a small game engine to be able to handle the Asteroids game, in this post we’ll look at how to implement the actors to actually make the game playable.

This is the second part of a two-part series on implementing an Asteroids game, and, if you haven’t already, you might want to read the first part, since it covers the basics of how the game is built, and things in this blog post will not make much sense without it. Also, if you are in a hurry, you can find the full implementation in this GitHub gist

In the first blog post we already implemented the asteroids and have them interact with each other and we’ll continue by looking at another important actor in the game: the space ship.

Just as we did with asteroids, the model of the space ship is drawn on paper and is made to fit inside a unit circle (a circle of radius 1). The space ship will have two parts: an outline of the ship itself and a small triangle at one end, representing the ship’s thrust — this will be shown when the ship is under acceleration: 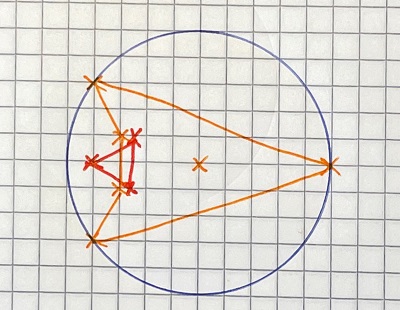 Here are the definitions for the space ship models. Since the space ship will be of constant size, the scale can also be defined as a global variable:

Just as with the asteroids, we can create the space ship with a physics body and have update/delta-time and paint methods, but unlike asteroids, the ship will start with no initial velocity or acceleration, that is, it will not move:

To make the ship move, we will need to handle user input and update the ship’s acceleration and angular velocity. This is done by implementing the keyboard-event method of the actor<%> interface, and there are two key things about the implementation:

We can use the space ship object as it is now, however, unless the user is very skilled, the ship can easily fly off the screen so it is no longer visible. To keep the ship inside the window (that is, the playing field), we can add collisions with the walls, same as we did to keep the asteroids inside the playing field in the previous blog post. Since the ship also has a physics body, we can reuse the body-wall-collision? function to check for the actual collision and tell the space ship that it bumped into a wall:

The space-ship% class itself will need to be extended with a get-body and bumped-into-wall methods, which are pretty simple: we handle bumping into the wall using the same bounce-body function from the physics engine, as we did for the asteroids:

To try out the new code, we can create a simple scene with just the walls and the space ship and see how it moves around:

If we add asteroids to the scene, the ship will fly through them, since there is no collision handler between the ship and asteroids. We can add a collision handler just as we did for the asteroid-asteroid collision, by simply using bodies-collide? function to determine if the body of the ship collides with the body of the asteroid. However, in case of the space ship, this test is too strict since, unlike the asteroids, the ship does not resemble a circle. To make the collision test more sensitive, once we have determined that the bodies collide, we can check if any of the points representing the ship is actually inside the asteroid. This way, we have a fast, but coarse collision test first, and if that one succeeds we have a somewhat slower but more precise test. When a collision happens, the space ship actor is simply removed from the scene:

And here is the body-point-collision? function, which checks is a single point is inside the radius of a body:

We can add back our sample asteroids into the scene to test if the new code is working, but, if you try to run the program so far, you’ll notice that there is no good visual indication of the collision, and while the program behaves correctly and the ship disappears, it is not very intuitive for the user:

To improve the visual look of the game, we can create an explosion% actor — this will be a purely visual actor, which will not interact with any other actors and will display a set of expanding bubbles that all “emerge” from a specified position. The actor has the familiar update/delta-time and paint methods: bubbles are updated according to their position, direction and speed and drawn on the screen as circles.

Since it does not interact with anything else, the explosion% actor will remain in the scene forever. To limit this, we can define a life-time for this actor: number of milliseconds the explosion lasts and once this life time expires, the actor removes itself from the scene.

Finally, we can update the handle-space-ship-asteroid-collision function to create an explosion at the position where the space ship used to be:

And here is the end result:

Since the asteroids can destroy the space ship when they collide with it, it is only fair to allow the ship to destroy asteroids. The way that works in the game is that the ship can shoot missiles, which, when they hit asteroids, break them up into smaller ones and very small asteroids are completely destroyed.

Missiles will be actors which are created by the space-ship% when the user presses the Space key, but otherwise will have a a lifetime of their own, being actors themselves. They also have a physics body, so we can make use of the physics engine for moving them. Here is the missile% actor:

A missile will collide with asteroids, so we need to add a collision handler for this case. In case of the missile, we check if the tip of the missile is inside the asteroid using the body-point-collision? defined previously. When an asteroid is hit by a missile, we remove it from the scene, along with the missile and replace them with an explosion%. Also, if the asteroid was big enough, we add three smaller asteroids to replace it:

Putting the initial asteroids back into the scene, we now have a functional Asteroids game:

So far, in our scene we have always added three asteroids which started at predefined positions. This makes the game predictable and, as the space ship shoots the asteroids, eventually there will be no more asteroids in the scene. We need a way to create new asteroids as existing ones are destroyed and we can do this by having an actor which monitors the amount of asteroids in the scene and creates new ones when this amount runs low.

To determine the total amount of asteroids in the scene, we can iterate over all the asteroids and calculate the sum of their areas (this is more predictable than simply summing their radius):

The asteroid-spawner% actor will use its update/delta-time method to check if the total asteroid area is less than a specified threshold, min-total-area, and create a new asteroid by calling spawn-asteroid. Calculating the total asteroid area is an expensive operation and this value does not change that often (certainly not 60 times each second). To reduce the computing resources, the asteroid-spawner% only does its checks at predefined intervals (once a second by default), and it keeps track of this using a counter, remaining-time which is decremented each time update/delta-time is called.

Finally, the spawn-asteroid function is responsible for adding a new asteroid to the scene. To make it appear that asteroids come from “outside”, it selects a random position on the screen and calculates a position outside the screen such that the asteroid moves towards the target:

We can now replace the three initial asteroids in our scene with a single asteroid-spawner% actor: when it initially runs, it will notice that the scene is empty and start spawning asteroids and it will keep spawning new ones as old ones are destroyed.

Many games have a concept of “lives”: then the space ship is destroyed the user gets a second chance (and a third one too). This concept can be implemented using yet another actor: the spares% actor checks periodically if a space ship is still present in the scene and creates a new space ship or changes the game outcome to 'game-over if the user ran out of spare ships.

The spares% actor also displays the number of total and remaining spare ships in the top right corner of the game window (and uses bodies and models to do the drawing):

The spares% actor will add new space ships in the middle of the screen, but during a game, there might be asteroids at that location, causing an instant collision, which is unfair to the player. We could find an empty spot on the screen and place the ship there, but a simpler approach is to make the ship indestructible for a short period of time after it is created — this will allow the user to move to a safe position before this indestructible period runs out.

This “cooldown” mechanism is implemented in two steps: first the space-ship% object maintains a “cooldown” counter which is initialized to an arbitrary value (5 seconds in the game) and decremented in the update/delta-time method of the ship class. The space ship - asteroid collision handler, handle-space-ship-asteroid-collision, checks this cooldown value and only runs if the cooldown is zero, that is, it only checks for collisions after the cooldown period has passed. In addition to this, to give the user a visual cue that the ship is invincible, a circle is drawn around the ship in the space-ship%’s paint method. To keep the blog post shorter, the implementation will not be shown here, but you can check out the GitHub gist for the full game.

Every game needs to keep score, how else would players be able to compare their skill level? In the asteroids game, the simple way to keep score is to award points for each asteroid that is destroyed, with more points awarded for destroying smaller ones, since they are harder to hit. We’ll keep the score in the global game-score variable and update it in the handle-asteroid-missile-collision function:

To display the score, we can use another actor, whose paint function will draw the score in the top left corner of the screen. To make it more interesting, the displayed score will lag behind the actual game score and will be updated in the update/delta-time method — this will produce the pleasing “counting up” effect for the number shown on the screen:

With all the actors set up, we can create the scene adding initial actors and run the game (you can find the fill implementation in this GitHub gist:

And here is me playing the game:

This has been a long blog post, but the actual implementation is still relatively small and self contained: both the game engine and the game itself are implemented in about 1000 lines of Racket code. I found the “Actor” concept an interesting one and it can be used in creative ways to implement an entire game. Apart from obvious actors such as asteroids and space ships, the game score and spare lives are also implemented as actors. Here is the full list once more: