A Racket implementation of a data frame structure, which allows efficient manipulation of data that is organized in rows and columns. It was originally written as part of the ActivityLog2 project, than moved into its own Racket package.

You can install the package using raco pkg install data-frame, browse the reference documentation or visit the project page on GitHub. The examples below illustrate some more complex things that can be done with this package.

The data-frame package was developed to help analyzing fitness data recorded by Garmin devices. A fitness device, such as a bike computer or a running watch, will usually record data at 1 second interval. Each recording will contain information about the speed, GPS position, heart rate, cadence, power and several other parameters. A 2 hour bike ride will contain 7200 such data points and each data point will contain up to about 40 measurements. Someone serious about training will record more than 200 such activities each year. The size of this data set requires some careful thought about how to keep data in memory so it can be analyzed and visualized efficiently, and the data frame representation came out of this requirement.

The data in the data-frame object can be viewed as a 2 dimensional table with rows and columns. Each column is called a “series”, which consists of a name and the actual data. The package contains operations for selecting subsets of the data, both on rows and columns, efficient search and indexing, plus helper functions to calculate statistics values and generate various plots.

A simple way to get an overview of the contents of the data frame is the df-describe function, which shows all series in a data frame and some statistics values about each of them:

A data frame object can store properties, which are simple key value pairs. In ActivityLog2 these are used to store such things as the sport type, session it and lap timestamps, but they can be used to store any data about the series in the data frame

The following functions can be used to get information about what series are available in the data frame:

The df-select and df-select* functions can be used to retrieve data from a data frame. The simplest method, is to just ask for the entire series. The following retrieves the entire set of heart rate values:

Data can also be filtered. For example, the following retrieves only heart rate values greater than 150 BPM:

Finally, a subset of the data points can be retrieved by specifying start and end indexes (see below on how to retrieve useful indexes):

The laps property contains a list of timestamps for the start of each lap in the activity:

Find the position where the second and third laps start:

Extract heart rate data or the GPS track for the second lap:

The df-ref and df-ref* functions can be used to retrieve a single value from an index in a series or in multiple series (df-ref*). Using the examples above, to retrieve the heart rate at the start of the second lap:

And to retrieve the GPS location where the second lap starts:

The df-index-of and df-ref functions can be combined into a single function, df-lookup, which can be used to lookup a value in a base series and return the corresponding value in a second series. Continuing the example above, the heart rate for the start of a lap can be retrieved using a single call:

Multiple values can be looked up using df-lookup*, which is analogous to df-index-of*:

The df-map, df-for-each and df-fold functions are similar to the corresponding Racket built-in variants, but operate on the values of series. They take the following parameters:

For example, the following function can be used to calculate the work (in Joules) from the time and the power series. The function receives pairs of data points and determines the amount of work (power * delta-time) and adds it to the accumulated value:

The df-add-derived function can be used to add new series to the data frame, as computations from other series. It is used in session-df for example to create a “distance” series (which is either in KM or Miles") from the “dst” series which is in meters.

The function takes the following parameters:

The example below, adds the accumulated work at each point in the bike ride:

The df-add-lazy is the lazy version of the function: it adds a closure to the data frame and the data series will be created the first time it is referenced. Special care needs to be used with this function, especially if it captures local variables, as the environment in which the function runs might not be the same as the non-lazy version.

The df-least-squares-fit function can be used to find a best fit function for some data in the data frame. It can find polynomial, exponential, logarithmic and power functions which closely match an input data set. To use it, you will need to specify the X and Y series names:

The resulting fit object acts as a function, so it can be plotted together with the input data set:

Here are some examples of fitting different data sets:

Re-working the map widget demo to use data frames

The map-widget demo used a small library to load a GPX file containing the track that is shown on the map, but with the data-frame library this is supported directly.

The example below uses the following racket file as the base. This file is evaluated and the rest of the commands can be typed in at the prompt:

A GPX file can be loaded in a data frame using df-read/gpx, and the resulting data frame can be inspected using df-describe:

The data from the GPX file is loaded into 5 series containing the latitude, longitude, elevation and timestamp for each point. In addition, a distance series, “dst” is added representing the distance of each point from the start of the track, this will allow us to look up GPS positions based on distance.

The GPX track can be added to the map widget by selecting just the “lat” and “lon” using df-select*. You might need to center the map, to move it to the location where the track is using the center-map method of the map widget:

To put marker locations on the map, we need to find the GPS location of each mile. The df-lookup function can be used to find an element in a target series given a value in a source series, for example, the call (df-lookup df "dst" '("lat" "lon) 1609) will return the GPS coordinates for the position at the first mile1 in the track. To find all the mile locations we can use a for loop:

Finally, the markers can be added to the map using the add-marker method on the map widget:

And this produces the following result: 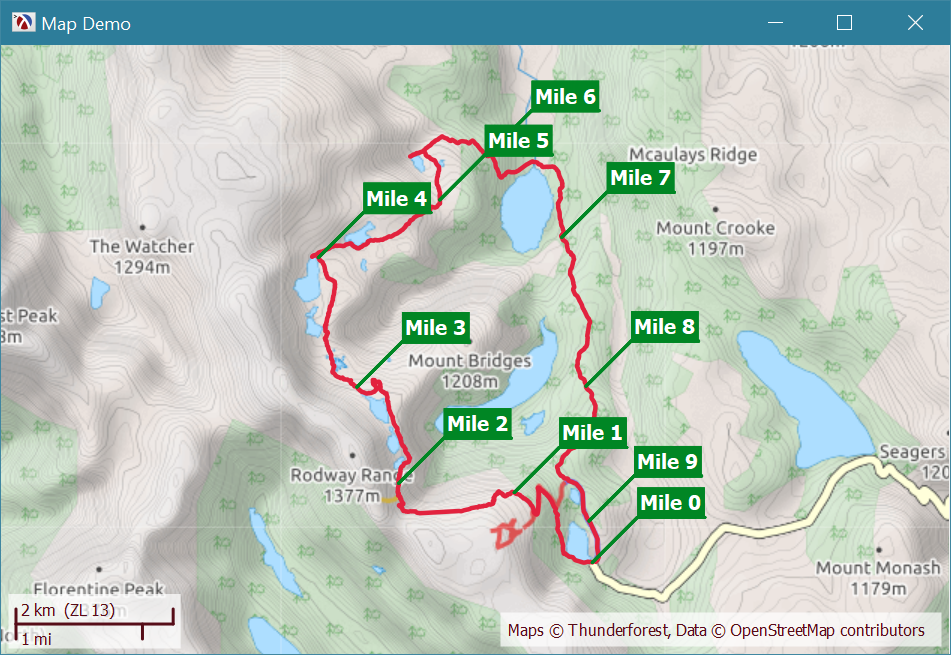 An interactive elevation plot can also be added, and the data frame functions df-select*, df-lookup and, a more appropriate df-lookup/interpolated can be used to simplify the code. The entire example is available in this GitHub Gist.